A Brief History of Land Registration in Palestine 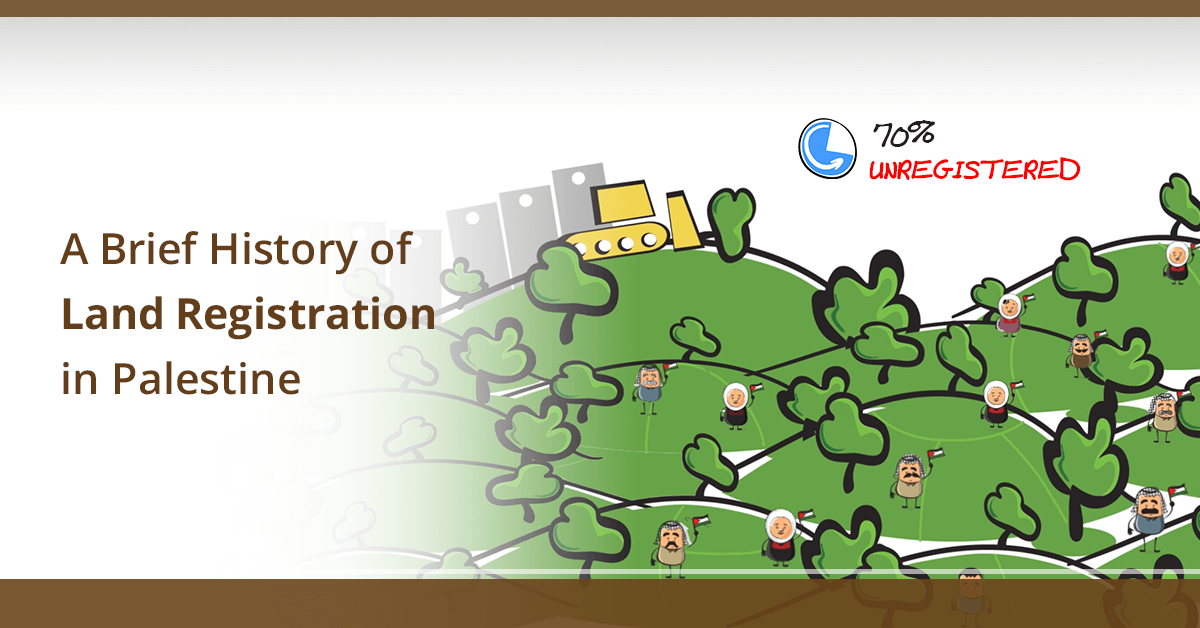 Anyone familiar with the TABO project has most likely noticed the emphasis put on the fact that UCI parcels are registered and come with a title deed. Why is this something to be highlighted? Should this not be a given? The truth is that in current the occupied Palestinian territories. It is not a given. In fact, it is quite the contrary.

Since the 1967 occupation of the West Bank and Gaza, Israel has implemented a range of discriminatory land laws aimed at making Palestinian land registration, proof of ownership and development extremely challenging. As a result of these policies, the land available to Palestinians has become scarce, and the opportunities to purchase affordable land with title deeds are very rare. Unregistered land, however, is vulnerable to confiscation by Israel, which then uses it for settlement establishment and expansion.

The confiscation of Palestinian land is mainly pursued through the manipulation of previously existing laws, a carefully selected range of Ottoman, British and Jordanian laws.

During Ottoman Palestine, every piece of land was to be taxed. For this purpose, significant emphasis was put on registering the owners of each parcel and creating title deeds. As the land registration expanded, the Ottomans created Land Registries called ‘Tabo’ all over the territory. Under Ottoman laws, land ownership was established by paying a tabo fee in exchange of the title deed. Most Palestinians living under Ottoman rule did not register their lands because, like most people throughout history, they did not want to pay taxes to the monarchs or sultans ruling them. This situation has a very significant impact today in the West Bank. Only a minority of Palestinians possess such title deeds, as the majority of the land remains unregistered, yet these tabo deeds constitute the most effective proof of ownership under the Israeli military system. Proving residence or use of the land for decades is not considered as sufficient evidence.

When the British established Mandate Palestine (1920-1948), they took over this process and expanded it, encouraging individual land registration to address the complex situation left by the Ottomans. Tabo Registries registered land under different categories according to its characteristics and form of ownership. The British favored a more simple and individual land ownership model, although the designation of legal owners was still based on Ottoman legislation.

During the Jordanian control of the West Bank (1948-1967), the system did not change and land continued being registered using the Tabo system. Despite the increased land registration rates – around one third of the land registration processes were settled by 1967 – overall registration remained low. This was due to different factors such as tax avoidance, as unregistered land was not taxed, and the lack of relevance of registration to exercise land-related rights in practice. This reality changed entirely following the Israeli occupation of the West Bank.

Selective Use of Laws to Facilitate Confiscation

In 1968, the Israeli Military Commander passed Military Order 291, stopping all ongoing land registration processes and prohibiting any further new registrations.[1]  This system combined with a discriminatory planning regime paved the way for the confiscation of substantial amounts of Palestinian land in the West Bank.

A process called ‘first registration’ constitutes one of the only exceptions to the blanket ban on new land registrations, but in practice this system is inaccessible to most Palestinians. As opposed to the previous registration processes – the Ottoman, British and Jordanians, which were encouraged by the authorities, the first registration process is entirely funded by the individuals wishing to register their land. The costs of the process include the lawyers of both the applicant and the Israeli Civil Administration, as well as levies of 5 percent of the value of the land being registered.

All Ottoman Registrations include a map specifying the location and size of the plot, but any Palestinian willing to register land via the first registration system must also provide an updated surveyor’s map of the plot, which also costs money. Military Order 291 also requires for the landowner to publish an application notice in “two Arabic newspapers widely circulated in the area and on a public sign in the village where the plot is located.”

All these requirements, combined with the selective use of historic land laws by Israel, have made land registration almost impossible for Palestinians. Today, around 70 percent of the land in the West bank remains unregistered.

This issue is very closely connected to confiscation, as declaring land as ‘vacant’ or ‘abandoned’ is one of the main tools used to confiscate Palestinian lands. Efforts to register land have proven to be one of the most effective tools against confiscation, and this is also why TABO’s issuing of title deeds for its parcels is a powerful mechanism to address the restrictive land ownership and registration system, as well as Israel’s ongoing confiscation of Palestinian land.

Continue to next blog